Project Ara is the codename for the modular phone concept that Motorola was working on, and which Google retained when it sold the rest of Motorola Mobility to Lenovo.

But deconstructing the complexity of a smartphone and refashioning it as a bunch of swappable components which can be slotted together in various custom combinations by the user is clearly no cake walk.

Nor is getting people to grok the concept of speccing out their own phone in hardware terms. (Although, really, when you think about it, the modular hardware concept is much like the modular software that users are now very comfortable with — aka apps.)

Designing an interface to explain the modular smartphone concept to users is something the video touches on, with an Ara configurator app shown to be in the works. ”We’re really trying to make this interface as simple as possible, and as spacially intuitive as we can,” says Eric Gunther, co-founder of SoSo Ltd, an interactive design studio that’s working with Google’s ATAP on the design of this app.

[/lightbox]
[two_third_last]Parts of a functional prototype of a Project Ara phone — still a work in progress — including the endoskeleton frame, the screen, electrical components and custom 3D-printed module enclosures.[/two_third_last] 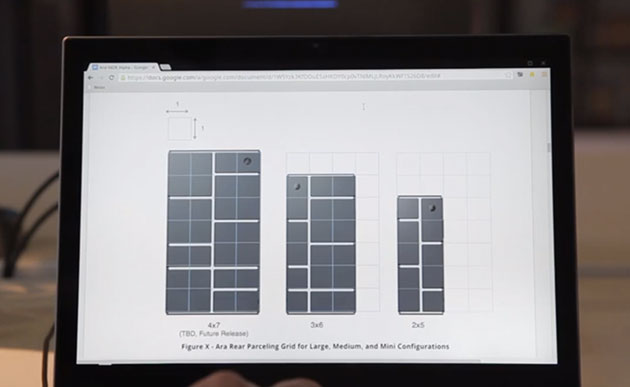 Project Ara has only exploded in prominence since Google unloaded Motorola earlier this year, and now we’re getting yet another peek at the work in progress. The Phonebloks team just released a video showing off the progress Google and its partners have made on those modular smartphones, and things are coming along just as quick as you’d expect.